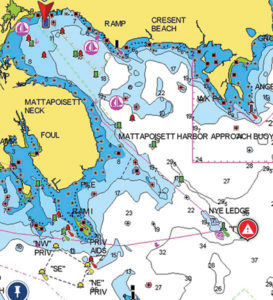 Six people were rescued from a boat that sank off Nye Ledge in Mattapoisett on 9/4/21. Graphic from Mattapoisett Harbormaster Facebook page.

On September 4, 2021, at approximately 5:45 p.m., a “MAYDAY” distress was broadcasted on VHF channel 16 and received by the United States Coast Guard Sector Southeastern New England from a vessel sinking with six persons aboard in the vicinity of Nye’s Ledge, Mattapoisett.

A Good Samaritan that was in the area was able to assist and safely transport the six persons to Mattapoisett Boatyard before the vessel sank entirely. The parties were met by Mattapoisett EMS to be evaluated; no injuries were reported.

The Mattapoisett Harbormaster Department along with the Marion Harbormaster and Massachusetts Environmental Police responded to the area of the initial call. Upon arrival, the vessel had completely [sunk] leaving no debris field. Initially, boat crews [searched] the area until dark with negative results.

On September 5, 2021, The Mattapoisett Harbormaster Depart­ment, along with the Marion Harbormaster, Massachu­setts Environ­mental Police and a con­tracted salvage crew con­tinued the search for the vessel and was unable to locate [it].

Additional agencies have been con­tacted to assist in the continu­a­tion of locat­ing the vessel.

Mariners should use extreme caution transiting the area of Nye’s Ledge and the waters of Mattapoisett.