The 23rd annual Swim for the Bay raised $120,000, a record, for the Buzzards Bay Coalition on Saturday, 6/25. The calm, warm day, with bright sunshine, made good conditions for the 240 people who swam the 1.2 miles from the Edge Seafood and Lounge in New Bedford to Fort Phoenix in Fairhaven. 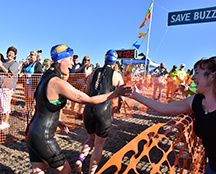 Samantha Lebeau, 33, of Providence, RI, gets a high five as she approaches the finish line in 41:07.

He said he loves to swim, and goes to the Y every day.

“It’s the only time I can swim in open waters like this,” said Mr. Medeiros. “The only thing I do (for exercise) is swim.”

“You can imagine why,” he added, referring to having only one leg. “I love swimming.”

Nancy Smith, 76, of Dartmouth, said it was a good feeling to get to the other side. She said it was not her best time, but that she was “always grateful” to be able to do it.

The Swim drew participants from 120 communities in 15 states, including as far as away as Alaska, Washington and Florida. Swimmers ranged in age from 12 to 76. 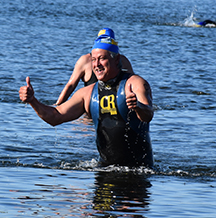 Daniel Vascancellos, 56, of Pembroke, Mass., gives a thumbs up as he reaches the finish line in 37:25. Photo by Beth David.

BBC President Mark Rasmussen said that swimmers get out of the water and comment on how clear and clean it is.

“That’s the most gratifying thing to me,” said Mr. Rasmussen. “I grew up swimming at this beach and it was nothing like it is now.”

After the Swim, participants, volunteers and supporters enjoyed a finish line beach party with a pancake breakfast, complimentary massages, live music from El Caribe and a live radio broadcast with Michael Rock of FUN 107. The event concluded with an awards ceremony.

“This is such a great event because it’s all about community,” said Laurie Hellstrom of Fairhaven, a masters swim team member at the New Bedford YMCA who completed her fifth Swim on Saturday. “It was a beautiful day. The water temperature was perfect, and you could see both the sun and the moon while you were swimming.” 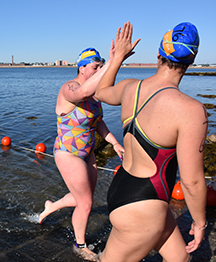 The Wheeler Watershed Challenge Cup for the fastest team went to the “Salty Sea Dogs” (Alex Gallant of Lakeville, Nick Graca of East Freetown and Trevor Ragas of Lakeville) with an average team time of 25 minutes and 51 seconds. 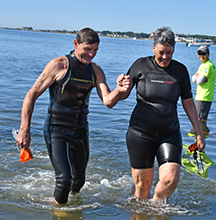 Gerry Payette, 64, of Bristol, RI, and his cousin Gisele Pappas, 60, of New Bedford, hold hands as the last two out of the water, crossing the finish line together in 1:24:15. Photo by Beth David.

Members of the public who wish to support the Swim can still donate at www.savebuzzardsbay.org/swim.