The annual Fairhaven town auction brought in a healthy $11,808 from selling off surplus equipment, vehicles, recovered items, etc., on Saturday, 9/28/19.

A larger than normal crowd assembled at the public works garage, probably due to the large number of vehicles and power tools available.

The biggest fetch of the day was 1999 Ford Tractor for $4,000, with well-known car dealer Louis Baptista taking it away. Mr. Baptista was also high bidder on a Gravelly mower with plow, for $900.

And although a few items did not get a bid, a very beat-up eight-foot inflatable dinghy went for $25.

“That’s great,” said Selectboard chair Charles K. Murphy, Sr., who played auc­tion­eer. “I thought I was going to have to pay someone to take it out of here.”

Brent Erickson bought to kayaks, including a green one with a small hole in it. He paid $15 for that one, and $205 for the other one.

He said the plan is to fix the green one and sell it, and that will pay for the red one.

There were scores of bicycles that sold in lots or individually, office equipment, some exercise equipment, several chainsaws, and other yard equipment.

Items come from a variety of places, including surplus equip­ment when departments upgrade, and items found abandoned by the police department, such as bicycles along the bike path.

The auction is held in September every year and is handled by the Board of Public Works. 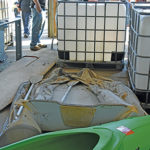 This beat up inflatable dinghy sold for $15 at the annual Fairhaven town auction on 9/28/19. The 13-foot surfboard (left) sold for $2. Photo by Beth David. 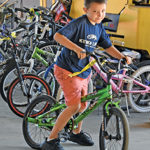 Emmett tries out a bike his dad, Wayne, bought for him at the annual Fairhaven town auction on 9/28/19. Photo by Beth David. 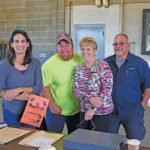 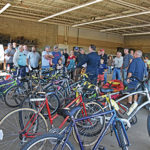 A collection of bicycles gets sold off in small lots at the annual Fairhaven town auction on 9/28/19. Photo by Beth David. 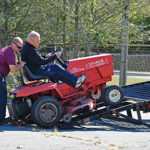 Louie Baptista (riding) gets some help loading his Gravely Mower with plow, that he got for $900 at the annual Fairhaven town auction on 9/28/19. Photo by Beth David.