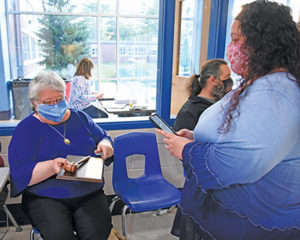 Sherry Medeiros (right) takes a picture of her mother, Cindy Francis, holding the gavel and plaque presented to her during Acushnet Town Meeting on 5/10/21 to honor her husband Bob Francis, who served as Acushnet Town Moderator for decades. Photo by Beth David.

The Acushnet Selectboard honored the town’s long time Town Moderator, Bob Francis, who served for more than 30 years in that role, by giving his wife Cindy a plaque and miniature gavel during Town Meeting on 5/10/21. Current Town Moderator Roger Cabral also used for the first time a podium created in memory of  Mr. Francis, and built by students from Old Colony Regional Vocational Technical High School. Mr. Francis died on March 4, 2019, after a long battle with lung cancer. He served as Town Moderator from 1981 to 2018.

Mr. Cabral told the public that Mr. Francis was an inspiration to him and faced many difficult decisions.

“There have been some really tense times in this room over the years,” said Mr. Cabral. “He was always an example of grace under pressure and was exactly what a town moderator should be.”

He said the podium would serve the town for 100 years remembering Mr. Francis.

He handed the plaque and gavel to  Sherry Medeiros, who handed it to her mother. 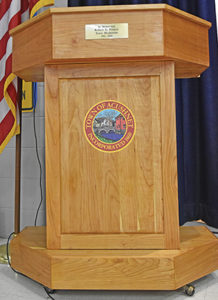 The podium made by Old Colony students in memory of Acusnet’s long-time tonw moderator Bob Francis, was used for the first time at Acushnet Town Meeting on 5/10/21. Photo by Beth David.