The turf project at Fairhaven High School was controversial from the start, not for the project, but for the funding. Last October, the project was supposed to be funded by Town Meeting by borrowing $1.2 million. But when it seemed like TM would not get the required 2/3 vote for borrowing, Superintendent Robert Baldwin amended the article to take the money from the town’s stabiliza­tion fund, which only requires a majority vote. It passed.

Now, towards the end of the campaigning for the special election, which is Monday, a new controversy has sprung up around the project. Stasia Powers, who is on the School Committee and is running for Select Board in that special election, has been criticized for supporting the project, and also for supporting the use of $800,000 in additional funding.

The extra funds are money from last year’s budget that did not get spent due to COVID-19. According to School Committee Chairperson Brian Monroe in a phone interview, the cuts in sports programs, staff that left and other expenses that were curtailed due to COVID-19 restrictions, resulted in the $800K surplus.

The accusation that the School Committee purposely did not publicly acknowledge the surplus funds is simply not true, said Mr. Monroe. He said the SC was notified in January by Dr. Baldwin that some funds would be available due to COVID. The SC discussed using the funds for repairs to the wheelchair ramp at the administration building, repairing or replacing benches at the middle school, and a list of other things.

Meanwhile, the turf field project was moving along and some additional work was recommended by the consultant. Mr. Monroe said the original amount from Town Meeting, plus $200,000 from the trust fund, was for the turf field only. The consultant recommended work to the bleachers, or at least wrapping them and using underneath for storage; fixing the fencing and updating the lighting around the field; and adding accessible permanent bathrooms.

Mr. Monroe said the SC was led to believe that they could get away with using a trailer or portable toilets instead of building permanent bathrooms. But after all the plans were made, they were told that they needed to build bathrooms on site.

He said they discussed how to spend the money, “All along the way…starting in January.”

After the SC awarded the contract, they sent the procurement to Interim Town Administrator Wendy Graves for approval.

Ms. Graves said in an email that she received the $2,181,366 procure­ment form after Town Meeting. She contacted the school to ask where the additional money was coming from and Mr. Monroe responded. Ms. Graves said she also contacted the town auditor and town counsel to make sure it was all legal.

At that point, it was just a done deal.

But then information starting circulating on social media about the additional $800K, with accusations and criticism about spending the money on “extras” at the field, and complaints that the public was not notified.

Ms. Powers responded to the criticism in a statement in last week’s issue, saying the extra funds were due to the “extraordinary circumstances caused by COVID-19.”

She said it was important to include some of the alternates, such as updating the lighting ($400,00), which will reduce the impact on neighbors.

“No educational programs were cut to fund this project,” wrote Ms. Powers. “Special Ed services remain intact and in fact will be expanded to improve Social/ Emotional Services in the coming year.”

She and Mr. Monroe both stressed that school department money is under the purview of the school committee to spend.

Mr. Monroe said that the whole controversy is due to politics and the election. In a letter in this week’s issue (see page 25) he wrote: “…most of what is being said is political noise generated from the incompetence and lack of leadership at Town Hall. The same people that are throwing rocks are the same people that criticize the condition of our facilities/fields.”

In the phone interview Mr. Monroe said that the previous town adminis­trator had frequent meetings with the school department during budget season. The current Interim TA, he said, only met with the SC once, and that was at their request.

The first he heard of it being a controversy, he said, was when he saw posts on social media.

He said the accusation that anyone tried to hide the information is simply not true.

“All I know is the information was there,” said Mr. Monroe, adding that if there had been “trust and a relationship” between the school department and town hall, the interim town administrator and Select Board would have known sooner.

He said Select Board Chairperson Dan Freitas’s contention that they just found out two weeks ago was not true, as the Interim TA had the information in mid-June, a timeline that Ms. Graves’s email corroborates.

Mr. Monroe said the department would have been open to listening to the town about other uses for the money.

“Of course we want what’s best for the town,” said Mr. Monroe. “We did what we were elected to do.”

He noted that all committee members live in Fairhaven.

Mr. Monroe said there is no way of knowing if the information was strategically released on social media to hurt Ms. Powers’s chances in the election. But the timing is suspect.

The recall election is on Monday, 7/26 (see page 19). Voters will decide if they want to recall Mr. Freitas, and then will decide among three candidates: Leon Correy, Cameron Durant, and Stasia Powers. 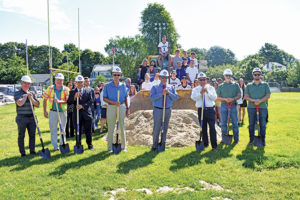