The Friends of Jack Foundation has launched a social media campaign dubbed the #TutuChallenge to raise money to purchase holiday toys for children in need on the SouthCoast.

The #TutuChallenge invites influencers from across the region to don a red tutu in a social media post and then pass the challenge along to a friend or colleague. Those who participate are asked to donate $50 to the Friends of Jack Foundation with all proceeds going back to kids in the community to make a memorable holiday that is also a little less stressful for their families.

“The overwhelming support from particularly the medical and business communities has been amazing. It’s just another example of how generous people are here on the SouthCoast. It also shows that we aren’t afraid to rock a tutu and take ourselves a little less serious when kids are benefitting,” said Jill Fearons, Executive Director of the Friends of Jack Foundation.

For more information on the Friends of Jack Foundation and to get involved in the #TutuChallenge, contact Jill Fearons at Jill@friendsofjack.org.

The Friends of Jack Foundation is a 501(c)(3) non-profit organization founded in 2019 by Jill Fearons. It is named in honor of her son, Jack, who is living with Chiari Malforma­tion, a rare condition in which brain tissue extends into the spinal canal. The Friends of Jack Foundation organizes overlooked healthcare-focused programs for children in the greater SouthCoast region of Massachusetts. These programs include Teddy bear and superhero costume programs for kids who are experiencing a situation that may be a stressful or scary. Fearons discovered the importance of small but impactful gestures while navigating many emergency and high-risk medical procedures with Jack.

To learn more visit https://friendsofjack.org or find them on Facebook. 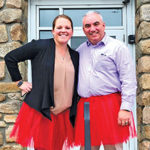 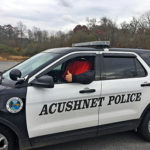 Acushnet’s new police chief Chris Richmond seems to have Googled the wrong thing when he tried to learn how to don the tutu for the challenge. But, hey, he accepted it, right? He challenged Fire Chief Kevin Gallagher, who also accepted. Photo from Acushnet Police Facebook page. 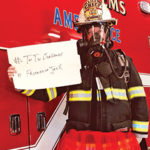 Acushnet Fire Chief Kevin Gallagher, reportedly accepts the tutu challenge, although it is a bit difficult to confirm with his full gear on. One suspects he protects his special “chief” hat, though, so we will take the leap and say he is in the tutu. The challenge benefits the Friends of Jack Foundation. Photo from the Acushnet Fire & EMS Facebook page. 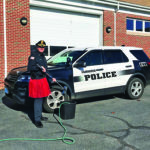 Fairhaven Police Chief Michael Myers accepts the Tutu Challenge from Dartmouth’s Police Chief Brian Levesque and dons a tutu to support the Friends of Jack Foundation, then went one step further by cleaning up around the station. Chief Myers then challenged the brand-new police chief of Acushnet, Chris Richmond, who also accepted the challenge. Photo from Fairhaven Police Department FB page. 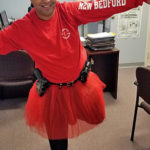